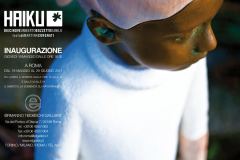 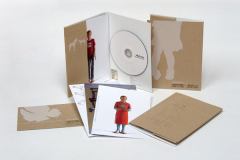 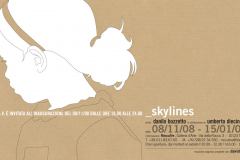 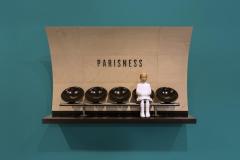 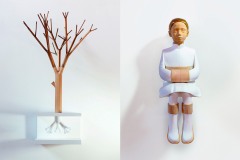 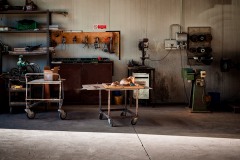 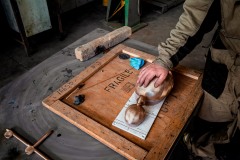 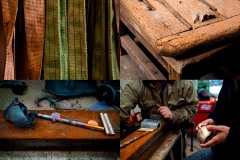 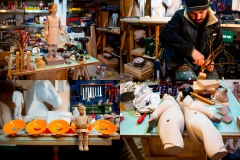 (From the HAIKU introduction by Martina Corgnati)

Umberto Diecinove and Danilo Bozzetto seem to take a stance in favour of the rediscovery, both ethical and aesthetic, of an opportunity for verse, an opportunity for reflection and the study of a slow form of expression. One could say, a language capable of waiting, a profound stance that does not anticipate decisions, that does not want to alter, affect or change things, particularly nature, but only contemplate, be in harmony with, establish an intimate, secret and sensitive relationship with space and the surrounding world.
At this stage, one might think that the two artists we are discussing have made a radical decision to isolate themselves, or at best take a “step backward” from the world, and have taken refuge in an idealised “garden of Arcadia” from where they send, or rather issue, their discreet messages and their sophisticated verbal-visual compositions. But that is simply not the case: quite the contrary, these two young artists are so far from seeking isolation that they chose to work together, a decision which is always difficult in the world of creativity.
Furthermore works feature a technique and a design approach that is absolutely and exclusively contemporary, and inspired by a taste for merged images, computer graphics and hi-tech rendering. The artist doesn’t want to “touch with a finger”, his fingers, he doesn’t want to colour his work with too “subjective” and individualistic an imprint, he doesn’t want to leave room for chance, luck or error, but rather to give his work the appearance of the “ready made”, i.e. “made by machine” (not the ready-made one comes across casually in the outside world), in an essential and logical way that can be potentially shared by everyone. They are precise, exact works: free of the imperfections of handmade craftsmanship.
The “I” of the artist is thus a connection between emotions and subjective experiences and common languages, just as the work of the poet is halfway between talking and being spoken, as Lacan would say. However “common” and “shared” certainly does not mean banal, popular or Kitsch.
From this point of view, Umberto Diecinove e Danilo Bozzetto are careful and committed sons or grandsons of Piero Manzoni, the first person – as far as I am aware – to study so lucidly the autonomy and “freedom” of surfaces, the exploration of their internal resources in Libera dimensione (the “pure and absolute light of a-chrome”) instead of those very ex-pressive, fluctuating and exhausted resources of the artist.
“That is why I can’t understand painters who, though they say they’re interested in modern problems, still place themselves in front of a painting as if it were a surface that needs filling with colours or shapes, according to tastes of varying attractiveness, more or less echoed from others. They draw a line, step back and look at their work with their head to one side and one eye closed, then they jump forward again, add another line, another colour from the palette and continue this gymnastic exercise until they’ve filled the frame and covered the canvas. The painting is finished: a surface of unlimited possibilities is now reduced to a kind of container that has had unnatural colours and artificial meanings forced into it. Why not empty out the container instead? Why not free this surface? Why not try to discover the meaning of a total space, of a pure and absolute light? … a painting is only worth something in proportion to how much it is a total being; it need not say anything: it must simply be,” Manzoni used to say.
Diecinove and Bozzetto, In their own way, have emptied the container, and have run the risk of giving up “artistic” individuality for the role of exclusive interpreter, the deus-ex-machina they now feel is false, but – and this is key – they have certainly not decided to throw out tradition and its great resources.